Entrian Acoustic Drums is a VCV Rack plugin that brings the sounds of real acoustic drums to Rack.  It includes two modules: a sophisticated drum kit and a free drum sequencer.

This short video demonstrates some of the features of the two modules: 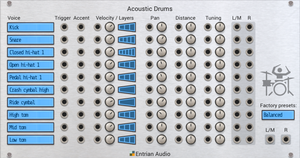 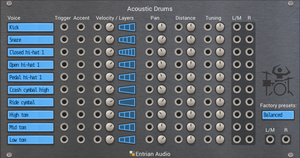 You can load your own custom samples into Entrian Acoustic Drums to play alongside the built-in instruments:

To load a custom sample, click one of the instrument screens and select "Custom sample file..." from the menu.  You can then load any WAV or AIFF file to play.

The modulation options Velocity, Pan, Distance, and Tuning all work for custom samples.

The Distance modulation works for custom samples by creating a "distant" sample by applying a slight room-sized reverb to the sample.  Adjusting the Distance knob fades between the original sample and simulated room mike, making it behave as it does for the built-in instruments (for which it fades between a real close mike and a real room mike).

The instrument menu includes a Gain slider, which lets you cut or boost the gain of the sample to get it into balance with the other instruments.  (The Velocity input and knob still work for custom samples, but the Gain slider has more range, letting you balance samples that are far too quiet or far too loud.)

Most instruments have multiple velocity layers, meaning they were recorded as, for example, soft notes, medium notes and hard notes.  The module automatically selects the appropriate layer for the volume of the note it's playing, but you can control which layers are used by clicking the layers in the Layers control.  If you want a softer, more laid-back sound, click to switch off the louder layers, and even loud notes will be played using a softer recording.

The Accent input boosts the volume of a note, and consequently moves it up into the next velocity layer.  It doesn't do anything that you can't do with the Velocity input, but it's convenient if you're using a sequencer that has an Acccent output, like Valley Topograph for example.

The kit includes some presets, each providing a different overall sound by adjusting the various parameters of all the instruments - mostly the Velocity Layers and Distance.

Close & dry: Close-miked dry sound, no ambience, no stereo spread.  For when you want full control over the ambience yourself.
Balanced: A mix of close-mikes and room mikes.  A natural sounding kit.
Big room: Just the room mikes, for a bigger, more distant ambience.
Laid back: Balanced mix of mikes, and low-velocity recordings only for a gentler vibe.
Full on: High-velocity recordings only for a bigger, punchier sound.  This preset also selects the most noisy instruments (for example Open hi-hat 2, which is noisier than Open hi-hat 1).

Hi-hats, and how to choke them

This works just like a physical drum kit: the hi-hats are connected as a single instrument, so if you play an open hi-hat followed by a pedal, the pedal will choke the open sound.  (To choke without playing any further sound, turn the velocity of the pedal hi-hat to zero.)

If you want to treat the different hi-hat sounds as independent instruments, choose the (independent) variants from the instrument list.

When you're modulating a property of a drum instrument (Velocity, Pan, Distance, or Tuning) you might want changes in the modulation to be frozen for each hit, or you might want those changes to apply in real time.

In the real world, you can (in theory at least!) move your microphones around, or even move the instruments around, to change the pan or microphone distance while a note is sounding.  But once you've hit (say) a cymbal, you can't change the velocity of that hit, and you can't adjust the tuning of the cymbal while the note plays.

The "Early decay" sliders on the "Instrument options" menu let you control decay start and end of each instrument.  You'd use these if you wanted to shorten the tail of an open hat, for example.

Normally the sliders are all the way to the right, at 100%, which plays the whole sample.  If you pull the "Decay start" slider to the left, the sound will begin to decay earlier.  Pull the "Decay end" slider to the left, and the decay will finish before the end of the sample.  The volume slopes away linearly from the "start" to the "end", so you can make the sample fade out, or you can chop it off abruptly, or anything in between, by adjusting the difference between the decay start and the decay end.

The Acounstic Drums plugin includes a free copy of the drum sequencer from the Entrian Sequencers plugin.  This drum sequencer has all the basics of a trigger sequencer, but also has plenty of features for creating and playing expressive drum grooves:

Clicking in the main display on the module's panel shows the popup editor: 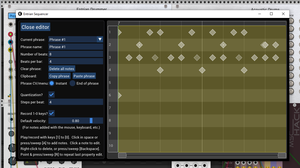 In the editor, you can:

All edits can be undone and redone in the usual Rack way, whether you're in the editor or not.

You can define up to 25 named phrases, and select them by hand using the Phrase display on the panel, or from a sequencer or a scene controller using the Phrase CV input.  Each phrase corresponds to a note, with C3 (-1V) selecting the first phrase, then running up 25 semitones to C5 (1V) which selects the last phrase.

When you select a new phrase from the panel menu, or via the Phrase CV input, it's optional whether the new phrase starts to play immediately, or whether the module waits for the end of the current phrase before changing.

You can also treat the Phrase CV input as a trigger, which will optionally:

You can Copy and Paste phraes within the editor, and between instances of the module.

The module expects a 1/16th clock, or 4 beats per quarter note.  But the playback resolution is way higher than that - you can position notes arbitrarily and they'll play at the right time, via an internal clock multiplier.

You can set the length of each phrase in beats, and the length of a bar in beats.  The bar length only affects the painting of bar lines in the editor; it doesn't affect playback in any way.

You can import drum grooves from MIDI files into Entrian Drummer.  Here's a 4-minute video demo showing how to import a full song into Entrian Timeline, which covers importing of drum grooves:

To record in real time, enable both Run and Record.  There are three ways to record a groove in real time:

In the popup editor: You can press the number keys on your computer keyboard to record notes.  They're placed at the current playhead position (the moving green line) with the velocity set by the Default velocity slider on the left.  This works whether the Record button on the panel is pressed or not.  You can switch it off with the Record 1-0 keys? checkbox, if you just want to audition the drum instruments without recording anything.

From a MIDI keyboard: Enable the Record button on the panel and connect a MIDI keyboard etc. via the MIDI-CV module to the C4-D5, Trigger, and Velocity inputs, and the white keys from C4 to D5 will record notes.  Set the MIDI module to polyphonic, in Reuse mode, via its right-click menu.

When recording, notes are quantized according to the Quantization settings in the editor.  The Steps per beat control governs the resolution of the quantized notes, so a setting of 4 steps per beat will round the note positions to the nearest 1/16th note.

To record a groove step-by-step, connect a MIDI-CV module to the recording inputs as described above, then enable Record and disable Run.  Now, when you hit a note on your keyboard / drum pads / whatever, that note will be added at the playhead position and the playhead will move forwards by the quantisation amount, ready for the next note.  To add a rest, ensure your mouse cursor is hovering over the module and press the spacebar.

Step recording works one note at a time.  You can use repeat markers to mark the section of the clip that you want to step-record into, and when you reach the end marker, the playhead will loop back to the start.  That's how to step-record multiple instrument hits at the same playhead position (rather than trying to hit two keys at exactly the same time!)

Left-clicking on a note in the popup editor lets you edit the properties of that note:

The Entrian sequencers give you quite a lot of flexibility when defining a Swing pattern:

You can define separate swing patterns for:

A more-specific pattern overrides a less-specific one, so for example a track-wide pattern applies to all the clips in that track unless a specific clip defines its own pattern.

The potential for making a truly hideous cacophany is huge.  You're welcome.

If you have any questions, comments, or bug reports, please don't hesitate to email support@entrian.com.